Stones pelted on house of senior Cong leader in Hyderabad 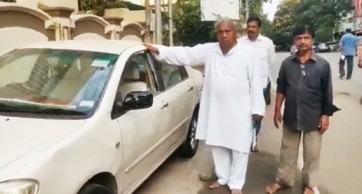 A car parked in front of a former Rajya Sabha member's house in Amberpet was damaged in the stone pelting.

Police rushed to the Congress leader's house and began an investigation after registering a case.

Hanumantha Rao condemned the attack. He criticised the government for failing to ensure his security.

He said a leader who had worked as the Pradesh Congress Committee (PCC) chief and an MP had no protection.

Rao said in the past he had received threatening calls and though he made a representation to the Director General of Police (DGP) no action was taken.

The former MP said he would continue to fight to solve the problems of weaker sections and backward classes.

State Congress chief A. Revanth Reddy has condemned the attack on Rao's house. He spoke to the senior leader over the phone.

The PCC chief said law and order problems were increasing in the state. He demanded immediate action against those involved in the attack and warned that the Congress party will not keep silent over attacks on its leaders.