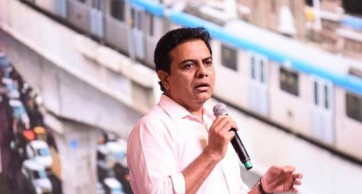 Rama Rao said he was amazed at the audacity of the BJP-led government at the Centre and its leaders. He branded National Democratic Alliance (NDA) as Non-Performing Alliance (NPA).

"Amazed at the audacity of NPA Govt & its chieftains who've destroyed economy, led us to highest unemployment in 45 years, highest inflation in 30 years & highest LPG rate in the world," tweeted KTR, as Rama Rao is popularly known.

"Have been a colossal failure for India/Telangana; yet come & lecture us on administration," added KTR, who is minister for industries, information technology, municipal administration and urban development in the Cabinet headed by his father K. Chandrasekhar Rao.

The BJP leader described TRS government as one of the most corrupt government and alleged that the Kaleshwaram lift irrigation project became an 'ATM' and a 'milch cow' for Chief Minister KCR who escalated the cost of the project up to Rs 1.2 lakh crore but not even an inch of land was irrigated.

He also alleged that there is corruption in Mission Kakatiya, Mission Bhagiratha and Harithaharam schemes. "KCR government is working like a land mafia," he said.

Nadda also slammed TRS for what he calls appeasement politics and dubbed TRS as 'Telangana Razakar Samithi'. He said the government was adopting a policy of divide and rule.